Due to flexible working hours and valuable earning potential, yoga certifications have greatly increased. Click here for an in-depth examination of this trend. 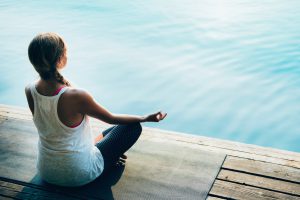 More and more people are getting their yoga certifications.

According to Yoga Alliance Registry, for every couple of thousand people who enroll, only about two or so actually become teachers.

So why is it that so many people of all ages and backgrounds want to pursue a yoga certification?

Why is it that not everyone enrolled in teacher training is using it as a step forward in their prospective yoga careers?

Read on to find out these answers. Plus the hidden benefits and downfalls with a yoga certification.

But first, what is yoga? And how did it become so popular in the first place?

Yoga is a series of postures, breathing, and meditation.

It originated in India dating back to roughly around the third century BCE, where Vedic scripture mentions the yoga practice.

The word, “yoga,” means yoke. As in, to yoke an animal. To put a wooden crosspiece over an animal, having the animal plow the land.

It is in these first Vedic scriptures during the third century BCE that we see the word “yoga” transition from yoke to the practice thirty-seven million plus Americans practice today.

How Yoga Became Popular in the US

As we mentioned, according to a study, roughly thirty-seven million Americans practice yoga.

Breaking this down, that means approximately one out of ten Americans get their yoga mats out.

And, dividing this stat into genders, we see 72% women and 28% men participate in yoga.

Two of the main reasons why yoga has gained so much popularity is fitness and stress relief.

Unlike your normal gym workout, yoga improves mental clarity and revives a sense of spirituality.

With the constant buzz of go go go, it’s no wonder Americans are drawn to this practice where they can slow down and breathe.

That and yoga provides a range of physical health benefits.

According to the American Osteopathic Association, some include greater flexibility, weight loss, improved cardio and circulatory health, and metabolic functioning.

Why More People Are Getting Yoga Certifications

With the number of people practicing yoga jumping from 20 million to 37 million, it’s no wonder we see an increase in yoga certifications.

But why are people pursuing yoga certifications when only one or two go on to actually teach?

We’re talking 200 to 300 hours worth of yoga. That breaks down into ten to twelve-hour classes.

Being able to not only find the time to attend the classes but to go consistently is a challenge in itself.

Then you have the constant stretching and posture adjustments, which puts physical and mental (positive) pressure on your body.

Similar to the previous point, many prospective instructors want to take their practice to the next level.

In a yoga class, yogis don’t have the luxury of getting one-on-one training from the teacher (unless they schedule this).

Chances are, their downward dog and cobra could be adjusted so their bodies receive the full physical and mental benefits.

In this sense, prospective instructors want to learn how to do the postures correctly.

Plus, how to properly breathe during a meditation and have their breath be in sync with the posture at hand.

It Helps to Heal Mentally

Prospective instructors could be facing a tough time in their lives. They look to teacher training to not just further their practice but provide spiritual comfort.

Especially since yoga requires that you have to focus on the present—or “the now.” By focusing on the present and not the what-ifs, yoga can provide temporary relief from emotional pain.

And, especially opening postures, you can release emotional tension and pain trapped in the body.

It Helps to Heal Physically

Yoga can also heal or alleviate physical pain in the body, which is another reason why so many pursue yoga certifications.

For instance, according to the Arthritis Foundation, yoga decreases joint pain and increases joint flexibility.

And it’s not just arthritis. A Yoga Journal article states that those who’re suffering from scoliosis (or crooked back) can do spine lengthening postures and breathing techniques.

While teacher training costs in the thousands of dollars, in the long run, those with yoga certifications can get their money back.

Because they don’t have to participate in classes; they already know the correct postures and transitions.

Especially if someone is dealing with a chronic disorder or slow-healing injury, this high short-term cost may be worth it.

Use Yoga to Give Back

Some people, like Tabay Atkins, enrolled in teacher training because they want to help a specific person, cause, or community.

In Atkins’ case, the 11-year-old became inspired by yoga when his mom was diagnosed with cancer.

According to a Huffington Post article, after her cancer went into remission, Atkins’ mother began teaching yoga and eventually opened up a studio.

Atkins saw the healing effects of yoga for his mother and wanted to get his yoga certification.

Just before his eleventh birthday, Tabay became one of the youngest certified yoga instructors.

Not only that but Atkins’ proceeds go to helping kids with cancer.

In this sense, yoga can not just help those in the classroom but those outside of it as well.

Yoga Is For Everyone

With the surge in yoga in the US, it’s likely we’ll see more and more people doing it, kids included.

Now there are studios and classes specifically dedicated to teaching yoga to kids.

Atkins’ inspirational story is an example in itself that anyone can get their yoga certification.

Some people in teacher training are even in their sixties.

This goes to show there is no age limit; anyone can benefit from the restorative powers of yoga. Which is why yoga certifications are in demand.

The Downsides to Yoga

While there are many positives to teacher training, there are some downsides.

Like we mentioned, depending on the program, teacher training can cost anywhere from $1,500-$20,000.

Depending on what you do after receiving your certificate determines whether you’ll get that money back.

For someone who simply wants to further their practice and do yoga on their own, they can easily get their money’s worth.

At the same time, others do go into teaching. And depending on their attendance and the studios they work with, they can surpass that expense.

However, that’s not always the case. Some people who get their yoga certifications can (and do) go into debt paying for the teacher training.

Once you get your yoga certificate, you don’t automatically become a successful yoga instructor.

Teaching yoga is a highly competitive endeavor. Yoga instructors may have to get creative in order to receive a steady income.

You might have to teach other exercises classes such as pilates and Zumba. Or you’ll need to teach several private, one-on-one classes. On top of the regular classes.

Being an instructor means commuting to one end of the city to the other in a day. You might have to go to three different studios in the same day.

And your gas will probably not be paid by the employer.

Speaking of which, yoga instructors normally are hired as private contractors. Which means you’ll have to provide your own health insurance and retirement

Since classes are spread out throughout the day, you may have a class at twelve midday and five in the evening.

You need time to get to know your regulars. And also fine tune your teaching. This, of course, takes time.

Since not many of the clients (or students) will know you, you may have a few classes where only five people show up.

Also, just because there’s a RSVP list of forty people doesn’t mean all forty will be at the class.

This makes it tricky to calculate your income if you’re pay is based on the number of people who attend your classes.

These downsides are some more reasons why many get their yoga certificates. But very few go on to teach.

Still, teaching can be very rewarding. You are, in fact, doing something you love. And many thrive in a working environment outside of the typical nine to five.

If you are interested in getting your yoga certificate, we recommend you do your research, especially when it comes to price and reputation.

Because not every yoga brand is created equal.

Yoga has a variety of benefits—from mental to physical. In fact, a National Geographic article, states that studies reveal that yoga can decrease inflammation in cancer patients.

Which goes to show the restorative powers of this practice.

How has yoga improved your life? What are some benefits you’ve seen since starting your practice? Leave a comment below!

Also, for more information about yoga, check out our news.